The Internet has once again spoken through its mouthpiece at Lifehacker and we have been nominated into the top 5, and are in the running to be the #1 best place to buy, rent, or sell textbooks. (we’ll of course be happy with a silver or bronze.)

A few years back we were #4 and at that time I noted that this is huge vindication for some guys and ladies in their underpants.  So once again, we just really, truly, and in all other ways want to thank you, Lifehacker fans, for voting us almost as cool as two other companies with hundreds of millions of bucks riding on convincing you they are better than us.  Hey, if you’re a fan, give us a vote, will ya?  I need some new underpants.

Reprinted here, for your giddy approval, is my reply to the first Hive Five…

“Let me paint you a picture. So… I’m sitting here in my underpants (penguin ones, burgundy, very comfy) thinking about how I really need to get to swapping out that flux capacitor on the Uber-BOT’s gyro-stabilizers, when this Google Alert comes in telling me that BIGWORDS was just voted the #4 best place on the Internet to get your textbooks.

So I’m looking at this, and it occurs to me: This is a huge vindication for a guy in his underpants.  I mean, look, #1 is Amazon. That’s Amazon. They’re worth like 100 trillion bucks and Jeff Bezos is so successful he probably doesn’t even wear underpants anymore. Then there’s Half, owned by eBay, also a huge fortune 10 company or something, and almost no underpants. After that came Chegg, started by a bunch of cool cats in their underpants, they raised around $120 million bucks in the last year. Then us, BIGWORDS, and finally, Abebooks, ALSO started a number of years ago by a dude in his underpants, but he sold it to… you guessed it… Amazon.

But look, here’s the thing… BIGWORDS compares prices from ALL of those other top 5 sites at once, and if any of them is the cheapest spot to get your books – we TELL you about it. We don’t sell anything.  There’s something else though… Given that BIGWORDS compares all of those other places’ prices, and given that we’re in the top 5, and given the fact that our net worth is about a buck-fifty on a good day, I have to imagine that at least a PART of the reason we’re only number 4 is that no one has ever heard of us, right? Or is that just the wayward dreaming of a guy in his underpants?

Let’s check in with the team:

mathiswrong: too hot. i got on umbrellas.

wwwwizard: k. anyhoo did you see this lifehacker thing?

wwwwizard: dood. what do you think?

mathiswrong: Huge vindication for a couple of guys in their underpants.

Thanks Paul. Let’s go to Justin.

jallen: CAW! That’s huge vindication for some dudes in their underpants!!!

Alright, now on to Brittney:

BritSansSpear: NONE OF YOUR BUSINESS!

wwwwizard: OK! Did you see this lifehacker thing?

BritSansSpear: YA! AMAZING! Makes me wish I was wearing just underpants!”

So anyway, all of us at BIGWORDS just really, sincerely want to thank all of you for caring and thinking we’re (almost) as cool as a bunch of companies that have 100’s of millions of dollars riding on convincing you how great they are. We’re seriously touched, and I’m not just saying that cuz I’m wearing underpants.

VOTE FOR OUR PLACE AMONGST THE TOP FIVE 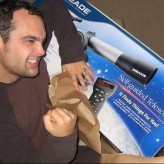